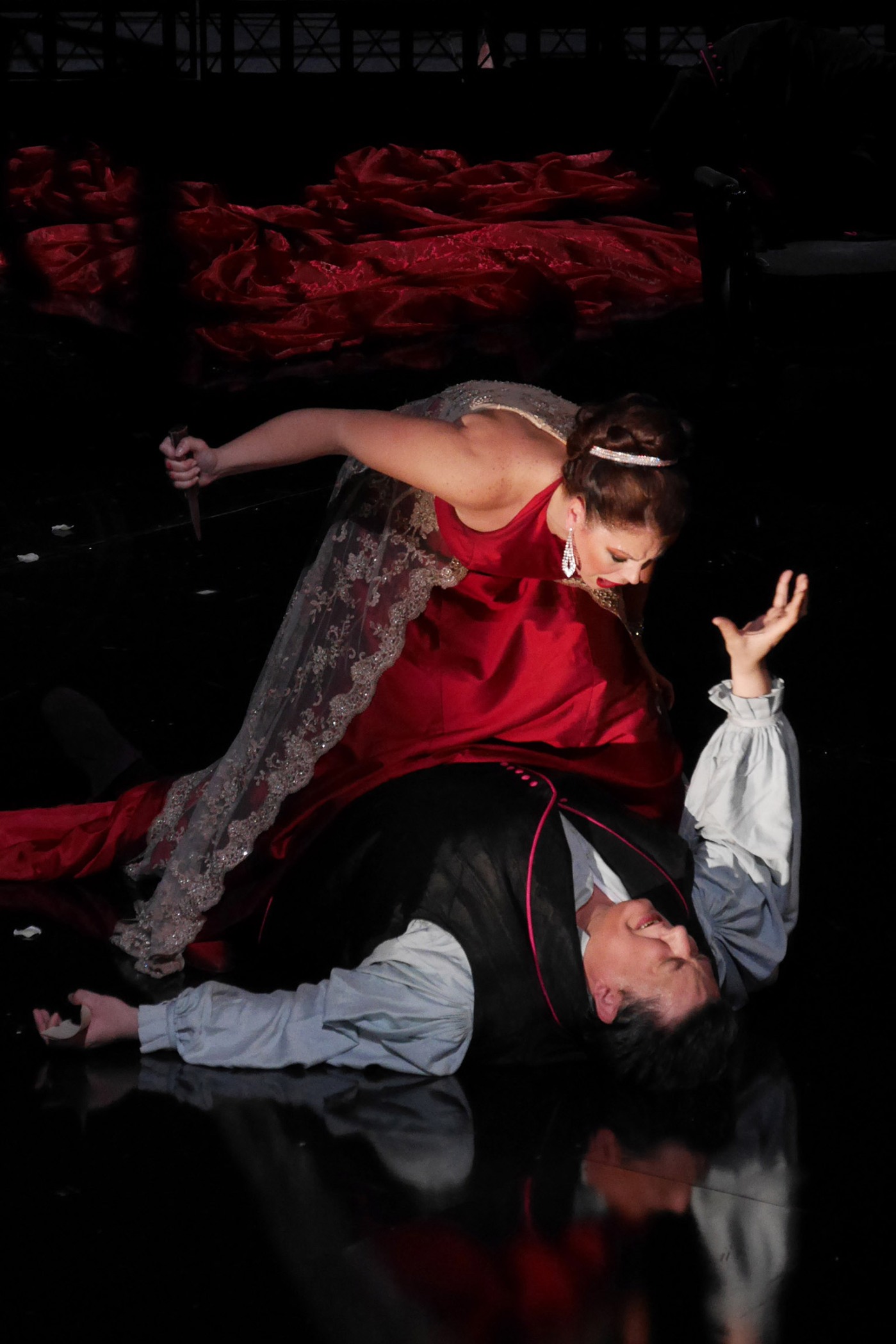 A double interview introduces a new section about stage photography, which will feature the most important professionals sharing their knowledge of photograpy and their feelings while working behind the camera. Thanks to a new collaboration with Jordi Pujal, Operafashion is honoured to host Antoni and Toni Bofill, two generations of legendary visual artist, official photographers at the Gran Teatre del Liceu since 1977.

You are two generations of photographers among the best for live entertainment. But where did Bofill father start? When did you realize that stage photography was your way? Your job?

Father-At the age of 14 I started photographing theater and dance at Centre Moral de Gràcia, a private association in Barcelona for giving support to ‘amateur’ art. Those days I took pictures for several types of arts, but I stood out more at theater, ballet, dance and zarzuela (we can consider it as Spanish operetta, very popular in those years for theatres as Centre Moral).

Let’s talk of the relationship with the camera and with the great photographers of the past. Who inspired you and who is your spiritual master, if there is one?

Father-I am a very self-taught person, always following my instincts and my perseverance, creating my own style thanks to the feelings that each moment gives me.

Son-Since we have created such a strong team, I have gained a lot of experience and vision from everything that my father has passed on to me, but at same time I’ve always tried to apply the latest techniques and technological changes (there are a lot) to my photography.

Photography and music are two passions, two ways to express yourself. In your life, was the photography that brought you closer to music or viceversa?

Father-At  9 I already had a passion for music; later, at about 14, when I made my first photo reports surrounded by music, it was something very pleasant for me, so I think that both activities (photography and music) became one passion. I must also admit that when I do a report, listening to music (and also ‘following’ it inside of me) helps me a lot because it allows me to take photographs with a different attitude. It’s very important to keep in mind that – at least for me – this profession is something absolutely vocational; so at the moment of taking a picture, I give myself completely to the opera and the character I have in front of my camera. And I try to capture the maximum of feelings and expressions for that moment.

Since 1977 you are official photographers of the Gran Teatre del Liceu in Barcelona. How did the collaboration with one of the greatest opera houses in the world start?

Father-It happened so fast, because Gran Teatre del Liceu was looking for a photographer, and the laboratory I was working with (for photo development) knew that I worked in theater, dance, etc., so they told me about Liceu’s request. I contacted the theater (those years it was a private theater managed by the impresario Joan Antoni Pamias): Liceu offered me a first assignment for the opera “L’Africana” sung by my beloved Montserrat Caballé and Plácido Domingo!!! From that moment on, they took me for covering Liceu’s photographic needs.

You photographed the greatest international stars of ballet, opera and the greatest conductors in the world. I think they are unforgettable experiences. What are your feelings in these moments?

Father-It’s a big satisfaction being close to these great figures, to photograph them up close, it’s nice to see they don’t put any trouble for my work and that they consider you as one of them. It makes me very proud.

Son– On stage they seem more distant, but from the moment they are in the dressing room this distance disappears and they transmit and share their feelings and the euphoria around their performance for an entire opera. It’s a a magical moment.

Is there a photo you are particularly fond of? Why?

Father-One of the pictures I’m most proud of is my absolute first one, taken during “L’Africaine” right when Montserrat Caballé came on stage: this was the ‘door that opened’ for my Liceu’s photographer career.

Which artists you’ve collaborated with have immediately clicked with the camera, in the sense that they have channelled the emotions they felt on stage?

Son-You know my career is shorter and it’s impossible to compare my list with my father’s, it would be pointless. So I’ll mention Natalie Dessay, Sondra Radvanovsky, Javier Camarena, Nino Machaidze and Jorge de León.

Is there an artist you regret not being able to photograph?

Father-Unfortunately there are a lot of artists that I haven’t photographed because they belong to old times or because they haven’t performed in Liceu. I could not name one in particular, the list is long.

Which opening nights of the season at the Liceu Bofill father remembers with greater emotion? And the son?

Father-All season premieres are important for me, it means I will continue to photograph great artists.

Son-I remember particularly well the inaugural season for Liceu’s reopening after the fire, in October 1999 with “Turandot”, because everything was back well placed, with a big stage, spectacular scenery and the excitement of that moment shown in everyone’s face.

Is there a privileged place inside the Liceu from where one can take the best stage photos?

Father-Every opera requires a different point of view, but in any case, I think the left side of the amphitheater is the best or most privileged place. It’s curious but most singers tend to go, or to stand on that side of the stage, I really don’t know why!

Son-A privileged place where unfortunately people are allowed very rarely is the stage itself, because you have a completely different view from the one that the audience has. You see the singers from the back, but at same time you see  the audience concentrating on what is happening on stage.

You photographed Montserrat Caballè for years. How did you work with such an incredible primadonna? What kind of photos did Caballè ask you to take? And what photos did she discard?

Father-I worked very calmly, she always treated me with great simplicity and kindness. She knew perfectly how to be in front of the camera, and she made everything very easy, although demanding because she was very sure of what she wanted to achieve. And she knew I was able to give her what she asked for.

What are the distinctive features of stage photography today?

Son-You must be very alert, because a small movement, a small expression, a change of light can decide if a photo is good or not, and you can’t organise it beforehand, you must seize the moment. Losing a shot is easy because things happen fast and the scene is ever changing. For this reason it’s always good to know in advance the work you’re going to photograph.

Tell us about the photographic process. How do the research phase and the making of a photoshoot work? What criteria are applied when you photograph an opera or a singing recital?

Son-For opera performances, the first approach is photographing during a rehearsal, this gives you more freedom of movement and several points of view; at the same time, you can also learn the different movements on stage. Later, we photograph the premieres with the different cast members involved in the production. Obviously, during a live performance with the audience, we must be careful, try to reduce our movements, so as not to disturb the audience. This has always been very important for us. When the event is a recital, we never join any rehearsals, we work directly during the performance. Opera and concert shoots are mainly done to provide visual material for the Liceu press office and for its documentation and archive services.

Are there any directors, set designers, conductors who have particularly influenced your work?

Son-A few times, during some rehearsals, we’ve been asked to follow some guidelines and actions because costumes, make-up, sets or stage movements were not outlined or well defined yet.

When photographing an opera or a ballet, in addition to knowing the evolution (also psychological) of a character, you must also know the artists who give life to that character and analyze how they act on stage. How do you do that?

Son-On the day before the performance I usually listen to that opera for “making it mine”; doing this I can learn when the characters or chorus appear on stage, and this is the best way for avoiding during the performance. The fact of having seen several live operas or many opera photoshoots helps me to understand what the different great moments of each play are.

In the artistic world of theater, the photographer’s gaze is examined by other creators such as directors, stage directors, set designers, costume designers. How do you deal with them? And what has changed in this relationship since the days of Bofill father?

Father-There are no problems, as long as there is a shot or vision that needs to be modified, an agreement is always reached, everything is discussed.

Son-Above all, the point of view of directors or creators always comes first, because they are the ones who have created that show and their role must be respected. Many times they tell us little tricks and explain their own vision, and that helps us a lot.

An adjective that defines your photography

Father-Photography must convey the expression of that is being sung on stage.

Son-Intensity, whether it’s about image, colors or emotion.

The last scene photo taken before the lockdown.

Son-A rehearsal of the opera “Lohengrin” staged and directed by Katharina Wagner.