Elena Mosuc is considered by international critics among the most expressive and versatile sopranos of Belcanto. She will be Mimì in “La Boheme” at Puccini Festival 2018 in the new production directed by Alfonso Signorini and the conduction of Alberto Veronesi. The Primadonna granted an interview to Operafashion with a lot of music, memories and fashion!

What have been the key steps of your artistic career?

First of all, the year 1990, when I won the international singing competition ARD-Wettbewerb in Munich, which completely changed my life. I had been studying singing privately for 10 years and at that point I was already very well prepared from a vocal point of view. Winning this competition has opened the doors to a new beautiful world, which has offered me so much but has also asked a lot of work, a lot of preparation, many sacrifices. Let’s say that this was the key to my musical life. I haven’t got anything because I have beautiful blue eyes! Even though I was already very well prepared, I had to work to grow in my profession. What all my colleagues and I do is a job where you never stop working. As my dear maestro in Zurich – Ion Buzea, a great tenor with a great career – says, “the job of the singer continues even after retirement!”. Of course it is true for those who really want to achieve something in life and have great respect for the public and for the stage, which I consider a temple.

The first step of my career happened in  Munich, where I began to sing regularly the role of the Queen of the Night in “The Magic Flute”. I first performed this role in Iasi, my hometown, singing in Romanian. The second performance was in Munich, where I sang in German. At the time I did not speak a word of German, but I learned it by myself quickly enough. I was, as in singing, self-taught. I learned Italian and German; I understand Swiss-German very well but I cannot speak it. I studied French and English at school. Now I’m studying again to learn how to control my voice and to improve my skills under the guidance of Ion Buzea in Zurich and of the wonderful Midelda d’Amico in Milan. With  them I’ve worked very hard to perfect my vocal technique by taking care of each and every sound, every tone. My teacher studied with the great Mercedes Llopart, who was also the teacher of Renata Scotto, with whom I did “Lucia di Lammermoor” in Thessaloniki many years ago (she was the director). In 1991 I was hired to be part of the Zurich Opernhaus ensemble, a contract that changed my life permanently. That autumn I moved to Zurich with a 3-year contract in my pocket, but I ended staying there for 22 years.

In 1993 I met my husband Christoph on stage, so I decided to settle down in Zurich. I am a Romanian-Swiss. Now I rarely go to Romania, sometimes to sing or to visit my family. In Zurich, under the supervision of Alexander Pereira, I’ve had the opportunity to put together a very large repertoire. My career began in Zurich, and from there it took me everywhere in the world. Absolutely everywhere in the world! Another important moment was my debut in Italy, the first time in Rome in 2000, again as the Queen of the Night (a role that I’ve been performing for 20 years, 250 performances in total). From there my Italian path started. Very important was my debut at the Arena di Verona Opera Festival in 2001 – for which I got the best debut award of the season – with Gilda in “Rigoletto” and Violetta Valéry in “La Traviata”. This really opened my way in Italy, a love that spans all through my career. Italy, the homeland of opera, loves me so much! A mutual love because in Italy I feel at home and I feel good! I’ve sung in all the most important Italian theaters, but I will never forget my debut at Teatro alla Scala in 2007 with “La Traviata”, an incredibly successful evening under the direction of Lorin Maazel. La Scala is a “holy” stage where all the great singers have performed! This was really a pivotal moment in my career.

After Teatro alla Scala, I conquered all Italy. I will never forget the fact that that night, during the first act I was singing as in a dream, as I were in a trance. sang. I “woke up” in the second act when I said to myself: “Yes, I’m singing at La Scala! Thank God!”. It had always been my wish to get to the Olympus of opera, but I wanted to get there at the right time, very prepared and able to say something with my art. I’ve performed many times at Teatro alla Scala, in many productions  – “Traviata”, “Rigoletto”, “Luisa Miller” (a new production where I got a huge personal success), “Carmen” and “Lucia di Lammermoor”. It took me 17 years to get to the Teatro alla Scala and 20 years to get to the Metropolitan Opera in New York. Meanwhile, Europe became my home, always flying from Paris to Berlin, Munich, London, Barcelona, ​​Warsaw. The next important step was in New York with the role of Olympia in “Le Contes d’Hoffmann” in 2010. An explosive success! I had sung this role since 1994, thanks to which I had “conquered” Tokyo, Shanghai, Hong Kong, Korea and Taiwan and also the Nordic countries. Another very important point was the prestigious Salzburg Festival where I sang the original and difficult version of Zerbinetta in “Ariadne auf Naxos” in 2012;  immediately after that I sang in “Luisa Miller” at La Scala. My musical journey continues with many debuts in new roles (every year at least one or two role debuts) and in new theaters.

What are the roles that have played a fundamental role in your career? And what role are you more attached to?

I sang the role the Queen of the Night a lot. It has brought me in all the continents. I miss only Australia and Africa … But they will arrive one day! Then the roles of Gilda, Violetta and Lucia. These four roles really are the foundations of my career. Now a new path begins, towards a certain “belcanto” repertoire, with more dramatic roles and more Verdi! I’m thinking of Donizetti’s Tudor trilogy (I have already performed in “Maria Stuarda” and “Anna Bolena”, so now I’m looking forward to debuting in “Roberto Devereux”) and of new Verdi roles like Desdemona, Leonora, after Violetta, Medora, Luisa Miller who still remain in my repertoire. In the future I’d love to perform as Giselda in the “Lombardi”, Elisabetta in “Don Carlo”, Lucrezia in “I due Foscari” and so on.

If you weren’t an opera singer, what would you want to be?

Before I began to sing professionally, I worked seven years as a primary school teacher, but I was too young, unexperienced, and did not understand the world of children very well: I had music on my mind all day long. I always sang for my students (I am still in contact with some of them and they still remember) or taught them many songs. Perhaps I would start this job all over again, even if I wouldn’t really want to, because it requires so much energy and time and puts a lot of responsibilities on you. Probably I will be a singing teacher. Surely I’ll do it when I stop singing. But that day is still very far away.

You have worked with distinguished costume designers : is there a scene dress that you are particularly fond of? And a “difficult” costume that you have worn?

There are so many costume designers that I love! Once, in Zurich, in 1996, I wanted to sing a role just because the costumes were beautiful: Elisetta in Cimarosa’s “Il matrimonio segreto”. The costumes were by Clare Mitchell, the opera was directed by Jonathan Miller: a fantastic production, of which I did only 2 or 3 performances! (laughs) Another very good costume designer is Jorge Hara, who made the costumes for “Lucrezia Borgia” in Brussels in 2009, or even William Orlandi, who curated the costumes of “Lucia di Lammermoor” in Thessaloniki, directed by Renata Scotto. I’ve loved the costumes of “Maria Stuarda” in the 2017 production in Genoa, fantastic costumes designed by Gianluca Falaschi. Other favourites are those of “Anna Bolena” in Lisbon and Verona designed by Paul Brown, who has recently passed away. Beautiful costumes but a bit difficult to wear were those of “La Traviata” at the Arena di Verona, created by Hugo de Ana, who also designed the set design, direction and lights. They were original copies of Maria Callas’ costumes, a little heavy, but achieving an extraordinary effect, of a unique beauty, with many details. I had to get used to them and to learn how to handle the movements on stage. In general, in my career I have been very lucky for performing in beautiful productions, with wonderful costumes and scenes, with traditional lines in effective harmony with the music. I’ve made some productions that were out of tune with music and history, but they have been very few. 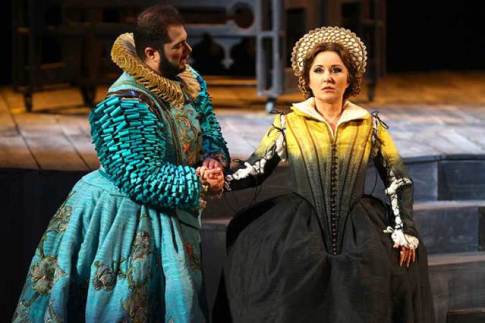 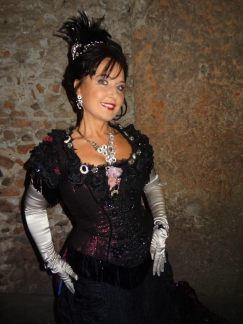 Hard to tell. There are so many good fashion designers, all very peculiar. In opera, costumes designers as Hugo de Ana, Paul Brown and many others! In my private life there is a fashion designer in Bucharest – Doina Levintza – who has made very good clothes for me. 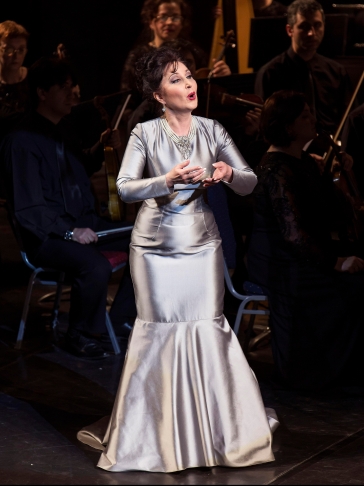 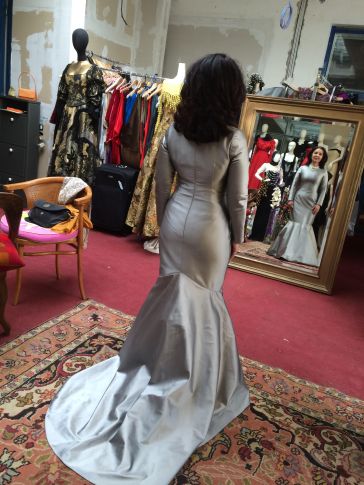 What’s your favourite perfume? Why?

I’ve loved perfumes since forever! I’ve tried many, but I am faithful to my Coco by Chanel. It is a perfume that is very good for me. It has his own personality. It is very suitable for sensitive people, delicate but also with lots of self- awareness. Perfect for strong women (laughs)… And I say that I am strong because all my life I’ve always had to fight to establish myself, to keep myself at a high level and stay on the scene… and the perfumes can be very helpful! (laughs) I’ve recently discovered another perfume which I bought in Oman: it’s by Amouage and is made artisanally with flowers. Beautiful! I also love jasmine oil, which I’ve recently worn during the rehearsals and performances of “Lucia di Lammermoor” in Genoa. I choose the perfume to wear on a whim of the moment!

Recently  your new CD “Verdi Heroines” has been released: what Verdi heroines would wear your perfume?

If I think of the heroines I played on my new Verdi CD, I think Coco by Chanel would be perfect for Leonora in “Il Trovatore”, Odabella of “Attila”, Mina in “Aroldo” and especially Lady Macbeth from “Macbeth”! All these are very strong heroines with extreme personalities! 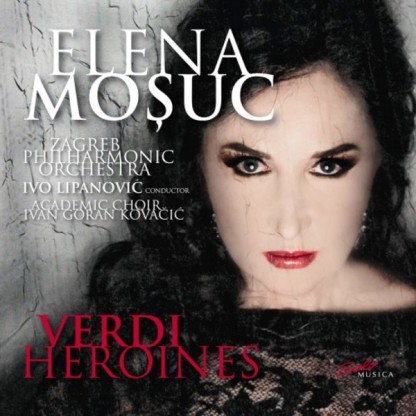 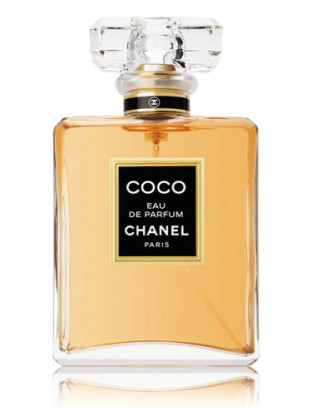 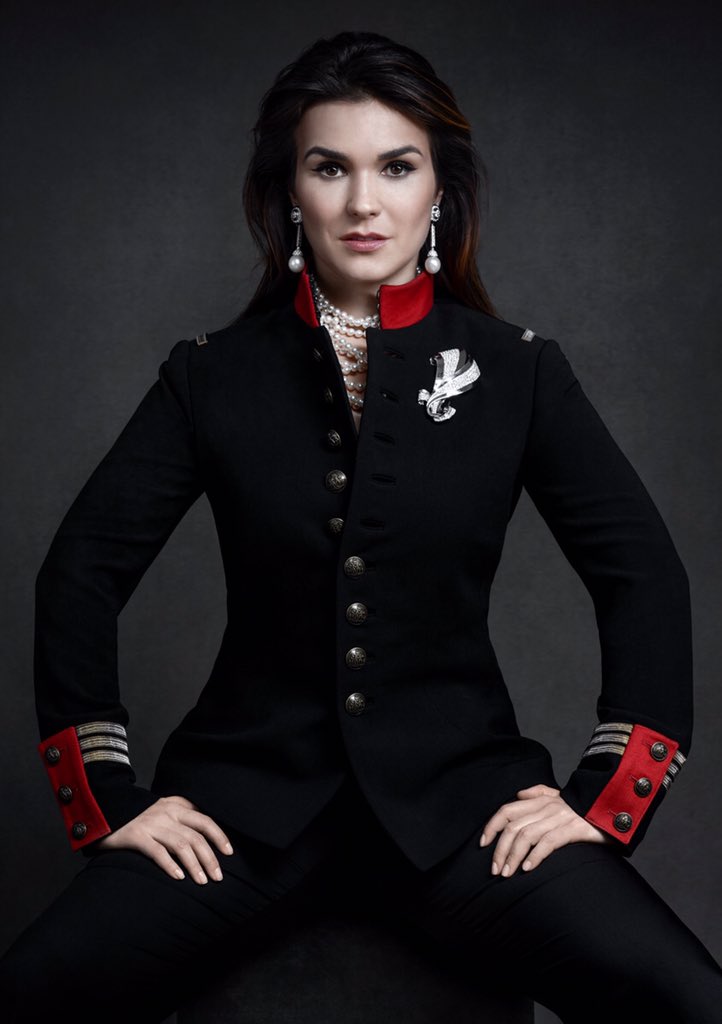