Giovanna d’Arco by Giuseppe Verdi was back at Teatro alla Scala in Milan for the first time in 150 years, in a new production to open the season. This first night, “La prima”, is always held on 7 December, feast day of Saint Ambrose, patron saint of the city. For the first time, Riccardo Chailly, principal conductor was on the podium, with Anna Netrebko ablaze in the title role of warrior-saint and Francesco Meli as Carlo VII, king of France.

After being acclaimed by the public, the Primadonna attended the gala dinner along with her fiancé Yusif Eyvazov. Anna wore an elegant silk maxi-dress by Alberta Ferretti: gathered V-neckline, long sleeves and fitted waist band. The dress is accompanied by a blue clutch and a beautiful La Strada by Chopard necklace in white gold and diamonds. Yusif Eyvazov wears a black velvet suit by Maximilian Mucska Tailors with Etro shirt paisley printed as well as the overcoat.

On December 11 at Palafiera Forli there was a “Recital of Puccini” with Maestro Riccardo Muti at the piano together with soprano Anna Netrebko and Eleonora Buratto and tenor Yusif Eyvazov. For this occasion, Anna wore a sweeping rose jacquard gown with bow accent, scoopneck and three-quarter sleeves by Carolina Herrera. Very sumptuous! 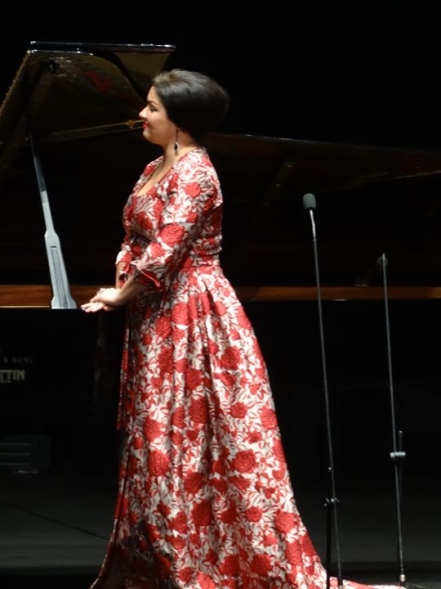